OK, dad’s big day is nearly here and maybe we have all finally gotten the message that neckties are no longer “one size fits all” when it comes to Father’s Day gifts. But don’t count on it; this year, 41 percent of all Father’s Day gift-givers will be presenting their dads with clothing items. It’s a sure bet a lot of those items of clothing will be – you guessed it – neckties.

Since 1966 when Father’s Day was first proclaimed to be the third Sunday of June, the necktie has been the ubiquitous gift of the occasion. But dads can take heart in knowing that in addition to clothing, special outings, like sports events and brunch, (38%) gift certificates (11%) and electronics (10%) round out the top four Father’s Day gifts of 2014, according to a recent National Retail Federation survey.

The survey says: Dads rate, but not as much as Moms. Americans are forecasted to spend a hefty $9 billion on Father’s Day gifts this year, compared to the estimated $13 billion spent for Mother’s Day.As the smallest of the American gift-giving holidays, Americans still spend, on average, $113.80 for Father’s Day.

The Greeting Card Catch 22: The good news is most Americans – 75 percent – plan to celebrate Father’s Day. The less good news is that the majority of those (nearly 69 percent) intend to give their fathers a greeting card, meaning he that is all he gets. (And he has to save the card for an undetermined time to demonstrate his appreciation of the gesture.)

If you are one of those determined to buy clothing this year, we have come up with two suggestions: One is if you wish to forego the tie, and the other, a two in one, for you die hard tie purchasers. These are a few of our favorite stylish shirts for Dad; made exclusively by Eton Shirts and patterned from Rossi Paper designs. 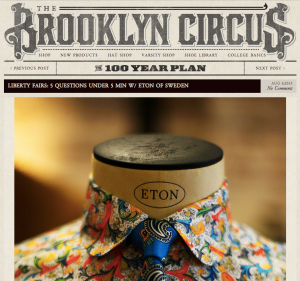 Eton was founded in 1928 and is today a successful, international shirt brand. The company stands for a long tradition of shirt manufacturing and fine craftsmanship. They offer a wide assortment of shirts and accessories where classic and tailored design is combined with a personal expression. Eton’s head office is located in Sweden, and has distribution in over 40 countries through brand stores and over a thousand selected retailers, including Saks Fifth Ave., Neiman Marcus, Nordstrom and Bloomingdale’s in the US.