For many of us–whether we choose to admit it or not–Christmas is about presents. Children eagerly wait in anticipation of Christmas morning. Far-sighted adults start stockpiling on-sale gifts early in the summer. The procrastinating multitudes flock to the mall in the week or days before Christmas. However, gift-giving did not become the central Christmas tradition it is today until the late 18th century. Stores began placing Christmas-themed ads in newspapers in 1820. Santa Claus, once and still known in some cultures as St. Nicholas, the increasingly popular bearer of gifts, started popping up in ads and stores 20 years later. . But despite the Christian roots of gift-giving, the practice ultimately steered Christmas closer to the somewhat secularized holiday it is today. By 1867, the Macy’s department store in New York City stayed open until midnight on Christmas Eve, allowing last-minute shoppers to make their purchases. Today, Christmas is the ultimate gift-giving bonanza.

Holiday gift giving began long before Christmas. The Romans would give gifts to one another on pagan festivals like Saturnalia, the winter solstice, and the Roman New Year. The tradition of gift giving became associated with Christmas because of the Three Kings’ offerings to the infant Jesus. The magi traveled to Bethlehem to present the gifts of frankincense, gold and myrrh. Early on the Church discouraged the practice of gift giving because of its pagan associations. But by the Middle Ages the tradition had become so popular that it became a mainstay of the holiday season. It was during that time that St. Nicholas, a Christian Bishop in Turkey, known for his generosity, was giving to those less fortunate than he. He also gave to children of all backgrounds, simply because he felt they needed to savor their childhood, and have joyous times to remember. The most common gift given were homemade foods and sweets, oranges, a rare treat. It moved throughout the world very quickly, and before the 10th century it is known that nearly every country was participating in this exchange on St. Nicolas’ Eve.

Although the tradition of gift giving has a long Christmas history, those gifts being presented in colorful paper and tied up in curls of ribbon is a relatively new practice. While Christmas cards began to be sent in the mid-nineteenth century it wasn’t until many years later thatdressing up presents in Christmas finery caught on.

Early on gifts were wrapped in simple tissue paper or more sturdy brown paper. In the nineteenth century, gifts were sometimes presented in decorated cornucopias or paper baskets. The technology did not exist to mass produce a decorated, foldable, paper until the 1890’s, when developments in printing presses allowed colored ink to be printed fluidly on stiffer papers. Before the introduction of scotch tape in the 1930’s gifts were tied up with string and sealing wax. 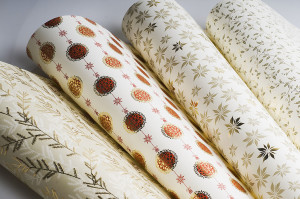 Over the years the look of wrapping paper changed as well. The first wrapping paper was decorated in the ornate style of the Victorian era. Gilded flourishes of cherubs, birds, and flowers draped across sheets of popular wrapping papers.

In the 30’s and 40’s, patterns became more stylized due to the popularity of Art Deco. 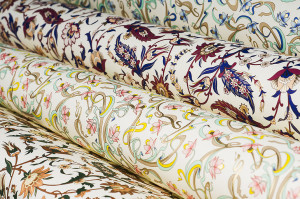 Decorations moved away from nature to symbols we commonly associate with Christmas today. 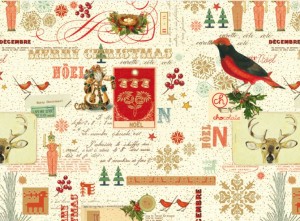 Popular patterns included ice skaters, snowflakes, Christmas trees, and candles. It was during these decades that Rossi’s decorative paper was born, inspired by traditional Florentine designs of the Renaissance. Later on they included contemporary alternatives

Aficionados rejoice! Next year’s Christmas papers are a combination of two techniques; letterpress and a heated application of gold, producing a very special outcome. 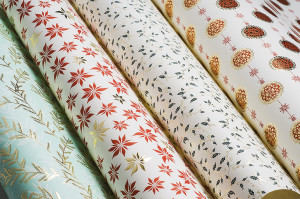 We here at Rossi are truly blessed to be able to do what we love and share our products with you. Thank you. Have a joyous Holiday season.

“We wish you light snows and twinkling lights. A home alive with cookie smells. A child to play with, a dog to pet and the hope of answered prayers.”