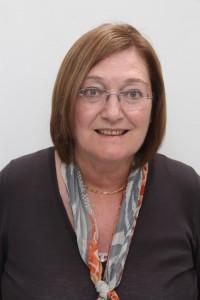 Anyone who has ever contacted Rossi1931, by phone or through the website has, no doubt, pleasantly encountered the sales, marketing and linguistic wizard, Joka Belgrado.

Joka has been with Rossi since 2007 after she and her husband had moved from Florence to the beautiful area of Tuscany known as Mugello, ( a beautiful wide green valley north of Florence) After commuting to Florence for work for several years, she decided,” enough of commuting!” Her husband told her of a local radio station that had been advertising different jobs. She signed on to their website one day and noticed there was a job very close to home with Rossi. “They were looking for someone in the export dept. with a good knowledge of English and German. I sent in my resume, was contacted and after 2 weeks I was working here.” A lucky day for Rossi, indeed. Not only does Joka speak English and German, but Dutch and Italian as well. She says,” years ago I spoke 6 languages, but when you don’t use a language for many years, it kind of sinks away.”

Joka was raised in Holland and Curacao, Dutch Antilles which was still part of the Netherlands at that time. After high school, she took a “gap” year and lived on a kibbutz in Israel. She liked the idea because she could work 4 hours a day and learn the language during the other 4. When she later transferred to the advanced language class in a different kibbutz near the sea, she met a wonderful young man from Italy and today they have been married for 38 years. After they returned from Israel to Italy, where she began college in Florence, they had 2 lovely daughters. Both out of the nest now, Claudia is an architect and lives in Sardinia and Sylvia, a nurse in Florence.

She loves her time with Rossi; “I handle the US and Canada markets, as well as the German speaking countries in Europe….Austria, Switzerland and Germany. I have daily contacts with customers and reps, research to find additional customers and sales representatives in selected areas, and do translations into English and German when needed. “A lot of potential customers find us through our website and sometimes I find them. Either way, I include them in mailing lists and when we send out warehouse catalogues.”

Her favorite part of the job: “The relationship that I have established with some of our customers and reps, which go beyond work”. She never gets bored. “I enjoy talking to potential new customers, explaining how we operate, encourage them to try our line. When they do and it works out for them, it’s a satisfaction and pride for me. They become a regular customer and I feel that I have made a contribution to the company.”

One would think time differences would be a major problem, but Joka handles it with ease. The internet of course helps, as she can simply email customers while she is at work and they are still sleeping. ” I prefer email by far, as the Romans said: scripta manent”. (Loosely speaking: ‘spoken words fly away, written words remain’). ”In my previous job we always had to confirm phone conversations in writing. It was a lot more work and they had offices all over the world”.

With all the positive growth in design and products at Rossi, Joka says there has been a lot of challenges, as well: ”The last 5 years has been difficult for many companies, everywhere. Italy is no exception. It has been very hard for small companies to stay alive and many have found it tougher to survive. Basically, I have seen that those who did not export have not made it. Rossi has been exporting for decades and that, in addition to making qualitative investments in IT, has kept the company alive and healthy. I feel very fortunate to work here.”

Outside of the fact that her job is only a 10 minute commute now, the best part of her time with Rossi is that she “is trusted and valued” for what she contributes and has “ a lot of independence in handling the job. I had never handled paper products in my career, so I had to learn the product first. It then became automatic to look at similar products in the shops. Now that I have some experience in the category, I think stating Rossi is at the top quality- wise is not an exaggeration. “

When asked to name the product she loves the most: “The letterpress design called Venice in the navy/mauve version. I like the fact that the design is 500 years old. I also like the idea of a new use of the vintage letterpress machines that Rossi kept”. 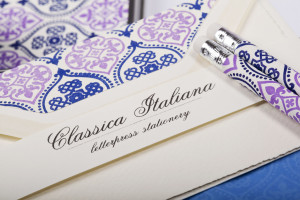 “Perhaps”, she muses,” I also like it because it’s called Venice, my favorite city in the world! “

Joka can be reached at: joka.belgrado@rossi1931.it