Letterpress is a form of relief printing in which the raised surface of text and images is inked and then pushed onto paper. The resulting print can be a deep impression, easily felt and seen on soft paper. Although the impression was not initially a desired effect by trade printers, today it is one of the most charming and interesting characteristics of craft letterpress.

As far back as the eighth century, the Chinese were performing woodblock printing. In fact, it is believed that a Chinese man named Bi Sheng (c. 990-1051) invented movable clay type in the 11th century—a painstaking process that involved placing thinly cut pieces of baked clay upon an iron

plate covered with heated resin and wax, and then pressing a board upon it to form the print. 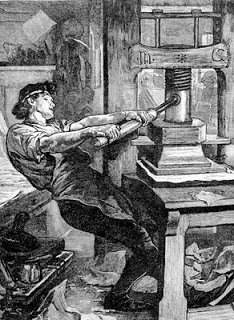 In 1440 a German by the name of Johann Gutenberg, after years of secretly tinkering in his workshop, with type pieces made from an alloy of lead, tin, and antimony,(the same components still used today), invented moveable type and the first printing press ,known today as letterpress. What Gutenberg did was invent a device that put individually cast, reusable metal letters in a frame, then inked and applied the letters with pressure to sheets of paper placed below. This was an ingenious method for quickly reproducing hand-written and block-printed works. These carvings of letters could be combined to form a page, then printed, and finally rearranged to form another page. Movable-type page setting was quicker, the metal type pieces were more durable than woodblock and the lettering was more uniform, leading to typography and fonts. This revolutionized printing in that it allowed, for the first time, the mass production of print material. In 1444, Gutenberg opened a printing shop, and began to mass-produce documents and books. The most famous one of them all is known today as the “Gutenberg Bible,” of which he printed the first 200 copies in 1455

A little known fact is that he derived the prototype for this first printing press based on the wine presses commonly found in his native Mainz. And so it came to be that the very first printed book was born.

By the end of the century, there were printing shops set up in more than 2,500 European cities, producing books the number of which scholars estimate to be between 8 million and 24 million.

With the continued advance of printing technology, letterpress printing decreased in popularity by the mid-20th century. Desktop publishing almost rendered it obsolete in the 1980’s, however, several colleges and universities today have programs teaching the art form for such applications as event cards and book covers. As a matter of fact, letterpress is enjoying a resurgence as artists and consumers rediscover the allure of hand-set type; beautiful tactile and simply exquisite, letterpress printing has a rich, warm feel that one can’t help but appreciate.

Several years ago, Rossi1931 began using their own antique presses and the results have been exceptional. www.rossi1931.com 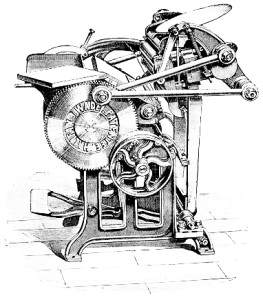